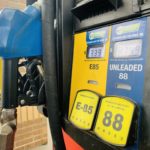 US Senator Joni Ernst says the Consumer and Fuel Retailer Choice Act, recently introduced in the Senate, would bring nationwide certainty to the sales of E15.

The Iowa Republican tells Brownfield the bill would allow states to sell E15 year-round without restriction. “I know this administration has really pushed heavily on electric vehicles, but folks we’re just not there yet,” Ernst said. “What we do have at our disposal right now is E15.”

She says the bill is expected to move forward in the new Congress.