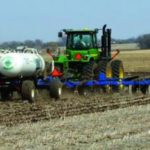 Duane Aistrope says he’s waiting for soil temperatures to hold steady at 50 degrees or lower. “And plus, the moisture,” he said. “We’ve got to have some moisture for that anhydrous to seal on the ground, so that you don’t just put it in there and it evaporates back into the atmosphere.”

He tells Brownfield anhydrous prices have been high, but… “I know I’ve got mine booked already, which was kind of a good thing because I hear anhydrous has jumped back up quite a little bit.”

Aistrope says he hasn’t booked his P and K supply for the fall.