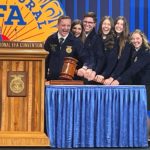 The six students selected to lead the National FFA Organization in the coming year were elected at the close of the 95th national convention.

Andrew Seibel of Virgina is the new national president. He says he’s most looking forward to the small moments.

“I want to make those ordinary moments for our members extraordinary because I think that’s where our influence as national officers lies,” he says. “It doesn’t lie on a stage; it lies in the small moments and in conversations with members to make them feel like they are seen and heard and feel special and feel passionate about this organization and the agricultural industry.”

Seibel tells Brownfield he’s also excited to follow in the footsteps of his sister, Tess Seibel, who was elected as the national FFA eastern region vice president in 2019.