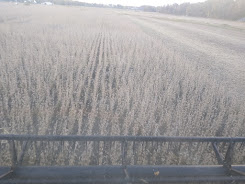 A farmer says the lack of a killing frost nearly halfway through October is not helping him get soybeans harvested in a timely manner.  John Eron farms between Stevens Point and Junction City, Wisconsin. He tells Brownfield the problem with green soybean stems and some late grasses pushing through is really slowing a lot of farmers down, and it’s costing more fuel. “Normally, we like to try getting four to five-mile an hour ground speed which is pretty common, but this year we’re running two and a half to three miles an hour.”

Bob Berkovich is an agronomist with Pioneer in southwestern Wisconsin.  He says the bean harvesting problem is widespread. “We’ve run into a little bit of a challenge getting soybeans cut and through the machine. We’ve seen quite a few green-stemmed soybeans this year.”

Although Eron still has around 300 acres of slow combining ahead, he’s happy about the overall crop. “Yields are running anywhere in that mid 60’s to low 70’s, so i would call it a win.”

Wisconsin is just one area where green stems are impacting the 2021 soybean harvest. Read more on Brownfield here.