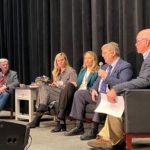 Roger Cryan says consumer prices have risen nearly 20 percent the past four years and he expects inflation to swell another five percent in 2023.

“That’s bad enough as it is as it creates uncertainty and volatility in pricing generally. But on top of it, the Fed is trying to address that through interest rate increases.