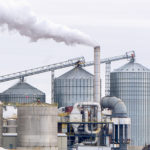 U.S. ethanol production was up last week, the second week in a row with a gain.

The U.S. Energy Information Administration says production averaged 1.008 million barrels a day, a jump of 65,000 on the week as plants resumed full schedules after the holidays.

The average was down 45,000 barrels on the year due to some industry uncertainties about demand with gasoline prices spiking in parts of the country due to movement delays caused by winter storms which was followed by increases in demand as that weather eased.