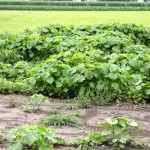 A plant pathologist says drought limited disease pressure for corn and soybeans in 2022.

He tells Brownfield soybean cyst nematode became prevalent at the end of the growing season.