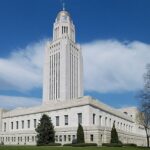 “I’m willing to give this a chance to see how it all works out.”

Tom Brandt of Plymouth tells Brownfield if there isn’t progress, then he will reintroduce his bill in 2024.  “We have 46,000 farmers in the state of Nebraska and a lot of locations of dealerships.  It will be very apparent from a year from now whether they accomplish what they said they were going to accomplish or not.”

A memorandum of understanding was signed at AFBF’s convention in Puerto Rico earlier this month and Nebraska Farm Bureau initially introduced the policy.