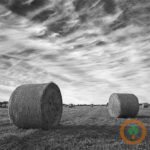 U.S. hay production declined in 2022 because of lower yields and acreage, which has impacted the domestic supply.

The all hay total last year of 112.801 million tons was down 7.395 million on the year, with the average yield slightly lower at 2.28 tons per acre and harvested area falling under 50 million acres.

Alfalfa and alfalfa mixes were reported at 47.958 million tons, 1.287 million under the previous year, also seeing a slight decline in yield with harvested area falling under 15 million acres, including record low alfalfa harvested area in Arkansas and Tennessee.