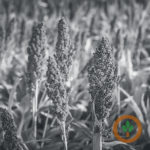 U.S. sorghum production dropped in 2022 following a big decrease in acreage and a significant decline in yield due to drought.

Production was reported at 187.785 million bushels, 58% below the 2021 total, with an average yield of 41.1 bushels per acre, a year-to-year loss of 27.9 on the year with many key growing areas heavily impacted by drought.

That drought also caused a big jump in abandoned acres, with harvested area falling nearly 2 million acres while planted area was down less than a million.