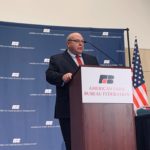 The president of the American Farm Bureau Federation says they have concerns with the EPA’s final Waters of the United States Rule.

“We still think that it is going to be a very confusing rule to our farmers,” he said during the 2023 AFBF Convention in San Juan, Puerto Rico on Sunday. “It will cause us to have to have consultants and lawyers to help us identify what is and what isn’t waters of the U.S.”

He says the agency attempted to clarify the rules around prior converted cropland, ponds and ditches.