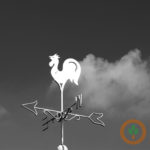 December was pretty much average in Wisconsin when all was said and done, but conditions for the month were volatile.

The USDA says early month snow fall ended the harvest season but helped provide cover for overwintered crops and while most of the state was hit hard by a blizzard just before Christmas, a late warm-up melted the snow and pulled statewide temperatures just above average.

That wide swing in temperatures has led to concerns about respiratory illness in livestock and melted snow cover which was protecting alfalfa and winter wheat.