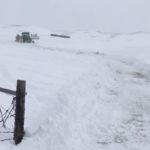 A Nebraska Sandhills rancher says this week’s massive winter storm is a step closer to busting the multiyear drought.

Gina Pospichal of Chambers tells Brownfield heavy snow began Monday night and some areas received more than two feet by Tuesday midday. “Everybody is hoping that it doesn’t start blowing and blow that off into shelter belts and ditches where it’s not needed.