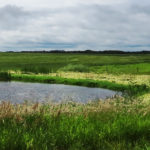 Agriculture groups are disappointed with the Environmental Protection Agency’s final Waters of the United States rule.

Alan Bjerga with the National Milk Producers Federation tells Brownfield EPA didn’t listen stakeholders who wanted the agency to stay a decision until the Supreme Court ruled on the pending Sackett case, which is expected to provide more clarity on the rule.

“If the administration could have at least waited for Sackett, maybe you’d have a better chance to craft a rule that would withstand,” he says.  “They chose not to do that, that’s adding to the frustration.”