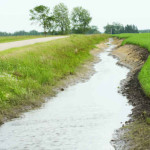 Agriculture groups are responding to the EPA’s final Waters of the United States rule. National Cattlemen’s Beef Association’s incoming president, a lawyer and South Dakota rancher Todd Wilkinson says it’s better than the Obama administration’s WOTUS rule, but there will still be issues with case-by-case analysis.

“That was the big problem prior to 2015,” says Wilkinson. “We didn’t have any regulatory certainty.”