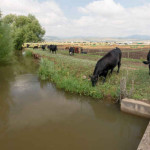 The Environmental Protection Agency and Army Corps of Engineers have upheld their promise to release a final Waters of the United States rule by the end of 2022. The final rule goes back to the pre-2015 WOTUS framework (the 1986 rule) with a few tweaks in the text. Ag Advisor Rod Snyder tells Brownfield the decision is based on feedback from listening sessions.

Other exclusions moved within the rule include some ditches, irrigated lands and artificial ponds for watering livestock.