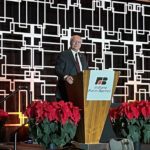 The president of Indiana Farm Bureau says two cases being considered by the Supreme Court could have major ramifications on the ag industry.

Indiana Farm Bureau’s Randy Kron tells Brownfield, “to have a case in front of the Supreme Court that could impact agriculture—there are very few of those and to have two (cases) is precedent setting.”

The industry is closely watching Proposition 12, which would prohibit the sale of pork, eggs, and veal that’s not produced according to the state’s standards.