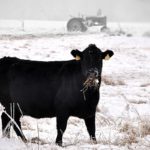 An eastern Iowa cattle producer says this week’s blizzard conditions have taken a toll on his herd.

“They tend to not drink as much,” he said. “And if they are not drinking as much, then they aren’t eating as much, which means we’re not putting weight on them.”

Lillibridge says he took extra steps to be prepared for the storm.