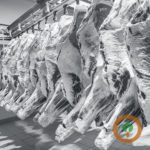 Commercial red meat production for November was down slightly on the year at 4.79 billion pounds.

Beef was reported at 2.42 billion pounds, 2 percent higher than November 2021.  Cattle slaughter was up 2 percent at 2.91 million head with the average live weight also increasing, up 2 pounds.

Pork came out at 2.35 billion pounds, down 2 percent from last year.  Hog slaughter declined 2 percent and the average weight declined a pound.