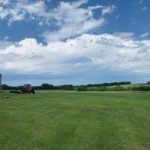 A state lawmaker in a Midwestern state has introduced a bill that would prevent foreign ownership of farmland.

Senate-elect Rusty Black of Chillicothe, Missouri says lawmakers previously voted to allow up to one percent of farmland to be held by foreign ownership.

“My bill does one simple thing,” he said. “It gets rid of the one percent and goes back to foreign corporations can own zero percent of land used for production agriculture in our state.”

Black says if total ownership exceeds one percent, a sale or transfer will be submitted to the Missouri Department of Agriculture for review.