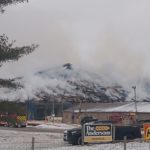 A fire has destroyed a large corn storage facility owned by The Andersons Inc. in Hemlock, Michigan.  Jeremy Scott is the Richland Township Fire Chief. He told reporters, “The initial on-scene reports were heavy fire. The second alarm was struck immediately. That brought us multiple other additional departments and resources in.”

Jonathon Dent is a farm reporter for Brownfield affiliate WSGW in nearby Saginaw, who has been covering the story since late Sunday night.