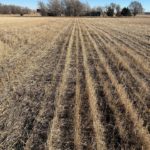 An ag meteorologist says this week’s extreme cold snap could cause irreversible damage to the nation’s winter wheat crop.

Matt Makens with CattleFax tells Brownfield wheat in parts of the Central and Western Plains don’t have a protective layer of snow to defend against sub-zero temperatures. “You’re allowing whatever wheat has come up already to be exposed to the dangerous cold.  This is not temporary. This is not a three-hour flash freeze.  This is a multi-day hard freeze that is going to last all the way into Christmas weekend.”

He says some of the crop could die, but that depends on the plant’s health.