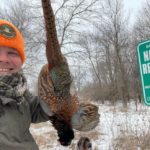 A hunter from Cedar Rapids, Iowa says he’s doing his own version of the Grassley 99-county tour as he continues his quest to harvest a rooster pheasant in every county in the state.

Nick Martin, also known as the Iowa Bird Chaser, tells Brownfield he began his 99-county pheasant hunting challenge back in the fall of 2020, and he only hunts on public land.

“I grew up being a pheasant hunter,” he said.