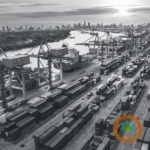 A Russian strike on energy supplies over the weekend caused Ukraine’s Port of Odesa to temporarily suspend operations, leading to some uncertainty about exports in the Black Sea region.

“There was no major port damage,” he said. “They actually could have been up and running yesterday just a day after all of this happened, but some of the weather over there was adverse so they had to hold back.