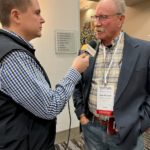 A small meat processor in Nebraska says is wanting to expand but grants announced in September haven’t been awarded yet.

Max McClean of McLean Beef tells Brownfield he was approved for an $80,000 grant that would double his freezer capacity. “We’re supposed to have the money before we start.  We have the plans and they have all that.  But, we have to get the money before we can get the containers coming and built.”

The Nebraska Department of Agriculture announced a total of $4.9 million in grants to 64 meat processing facilities across the state via the state’s Independent Processor Assistance Program.