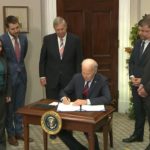 President Biden has signed a bill into law that averts a nationwide rail strike.

“A rail shutdown would have devastated our economy,” he said during a ceremony on Friday. “Without freight rail, many of the US industries would literally shutdown.”

But Biden says he’s disappointed an amendment that would have provided additional days of paid sick leave for rail workers failed.

“We still have more work to do in my view in terms of getting paid sick leave, not just for rail workers, but for every worker in America,” the President said.