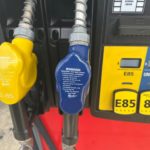 “If the EPA put the RFS back on track in 2022, this proposal puts the RFS into overdrive.”