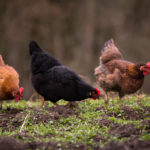 Arkansas has confirmed its third case of highly pathogenic avian influenza.  Arkansas Secretary of Ag Wes Ward says testing confirmed the virus in an Arkansas County backyard flock after an increase in mortality.

The state department of ag says there have been several reports of HPAI in wild birds along the Mississippi Flyway and it is urging poultry owners to enhance biosecurity measures on their operations to protect their flocks.