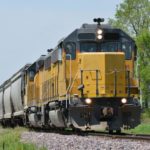 The House has passed a bipartisan bill that would prevent a nationwide rail strike.  It passed on a 290 to 137 vote. The measure, H.J. Res 100, would implement a tentative agreement that was recommended by a presidential board, but was rejected by four of the twelve rail unions.

The bill now heads to the Senate for consideration and will need 60 votes to pass.