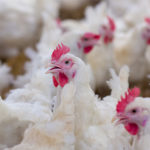 Highly Pathogenic Avian Influenza has been confirmed in a chicken layer flock in southern Missouri. State veterinarian Steve Strubberg says 10,000 hens in a pair of barns in Webster County were depopulated.

“There’s a control area we’ll monitor closely with some required testing and we’ll be watching movements on and off poultry farms.”

Strubberg says wild bird populations have been sticking around longer than normal due warmer weather. Biosecurity helps keep the virus from spreading.