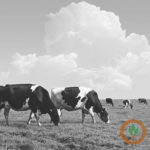 Milk futures and cash dairy prices were all down again Monday on the Chicago Mercantile Exchange with the exception of butter.

Dry whey has been stalled for a week, and remains unchanged at $0.44.  No sales were recorded.