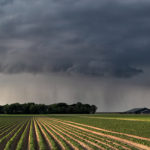 An atmospheric scientist says farmers in the Western Corn Belt battled unprecedented weather challenges during the heart of the growing season.

Eric Snodgrass is with Nutrien Ag Solutions. “It was one of the craziest years I’ve seen in awhile in the Central Plains with the massive severe weather event they had early that knocked out all of the pivot irrigation. Then, the drought that they settled into later.  I mean, the number of days above 100 Fahrenheit, it’s been a long time since I’ve seen such a hot summer there.”

He tells Brownfield the region missed out on several opportunities for significant relief.