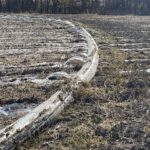 A Southwest Nebraska farmer says he’s thinking outside the box to help get his winter wheat crop to emerge.

Don Batie tells Brownfield historic drought has dried up soils. “The one field that we’re trying to water up is actually gravity irrigation. I’ve never tried this before so it’s an experiment.”

He says he planted the crop at a slight angle after soybeans had been harvested. “I’m trying to water down the old ridges.