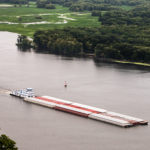 Mayors of towns along the Mississippi River are proposing improvements to national drought policy as they battle the worst drought in thirty years.

Greenville, Mississippi Mayor Errick Simmons is co-chair of the Mississippi River Cities and Towns Initiative (MRCTI). He says the group has developed seven policy proposals to be considered by the national drought resilience partnership: