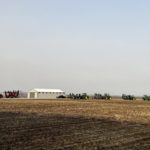 A local sheriff says quick action by farmers helped prevent major losses from wildfires in Nebraska over the weekend.

Lancaster County’s Terry Wagner says drought, extreme winds and low humidity sparked two large fires near the state’s capitol city of Lincoln. “Farmers in the area did a great job of, on their own, getting in their tractors and getting disks out and creating fire breaks around residences in that area.”

Speaking with reporters this week, Wagner says it’s too early to determine the amount of damage the fires caused, but without farmers it would’ve been worse.