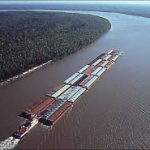 Barge traffic on the lower Mississippi River is backing up as the lack of water has river levels at a record low.

The Army Corps of Engineers says the river stage at Memphis, Tennessee was negative 10.79 Monday, or almost eleven feet below normal, passing a record set in 1988.