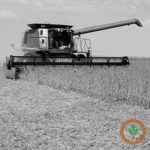 “The damp weather is obviously allowing the beans to mature somewhat, and I think as soon as it dries up now, we can finish the beans,” he says.

Hunt says his soybean harvest is two-thirds complete but dryness during June and July has cut up to 15 percent off his yields.