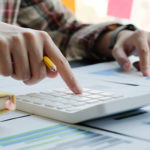 Like many farmers around the country, Roger Baker of Ohio is facing record high input prices.

He says the cost of filling his on-farm fuel tank has changed drastically in recent years.

Baker operates a grain, hay, and cow-calf operation and says the cost of baling hay has also increased.