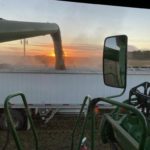 The USDA reports as of Sunday, nine percent of soybeans are harvested, on pace with the five-year average Sixty-eight percent of the crop is dropping leaves with 47% rated good to excellent.

Cotton harvest is six percent complete, compared to 12 percent on average. Eighty-three percent of the crop is opening bolls and 56 percent is considered good.

Corn harvest is 34 percent complete, compared to the five-year average of 44 percent.