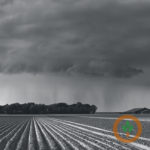 “I think it’s really going to help the late-season soybeans and help corn with ear fill,” he says. “For as dry as we were from the middle of June to the end of July, stuff really has held on and looks pretty good.”

He says it likely won’t be a bumper crop.