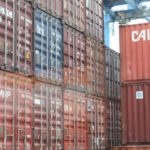 Agricultural shipments through the St. Lawrence Seaway are up significantly for the first eight months of the year.

“There’s a lot of demand on the market right now for fertilizers and potash materials so I think the seaway is helping to fill that need,” he says.

Canada is the world’s largest producer of potash which Middlebrook says mainly moves through Thunder Bay in Lake Superior.