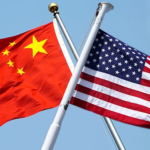 An ag economist says a return to U.S. – Chinese trade tensions could be coming.

Ohio State University trade and policy expert Ian Sheldon said the trade war with China isn’t over. He tells Brownfield major market disruptors like Covid-19 and Russia’s invasion of Ukraine have only forced a ‘cease fire’.

“The 25-cent soybean tariff is still in place,” Sheldon said. “So, the trade war is on hold. But the current administration isn’t showing any signs of changing its position on those tariffs.”

And Sheldon said the current tariffs could be causing problems for the general U.S.