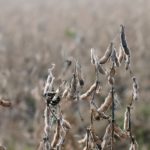 But, Uhrmacher says, he received a half-an-inch of rain this week and that has stalled his progress. “Just sitting and waiting for the sun to come out so we can cut again.”

He tells Brownfield the moisture will help get his cover crops growing.