Six members of the 11-person shift that arrived to battle a late-night house fire on a cool September night remain on active duty with the Muscatine Fire Department. Four have retired or moved on. One remains the only Muscatine firefighter to die in the line of duty.

A year and three days after 343 firefighters perished in a terrorist attack on the World Trade Center, Muscatine lost one of its own while battling a house fire. Firefighter Michael Kruse was 53-years-old and a 27-year veteran of the Muscatine Fire Department when he lost his life on the night of September 14, 2002.

Kruse will be remembered during a special service Wednesday, September 14, with the laying of a wreath, placing of structural firefighting gear, and a moment of silence at the Firefighters Memorial commemorating the 20th anniversary of his death.

Kruse remains the only Muscatine firefighter to die in the line of duty, the only Iowa firefighter to lose their life while on duty in 2002 and the 131st in the state of Iowa since record keeping began in 1890.

Jerry Ewers, now the Muscatine Fire Chief, fondly remembers meeting Kruse for the first time as part of his team at Station 2, and sadly remembers the night Kruse lost his life.

Muscatine Fire Department’s Green Shift responded to a structure fire at 10:30 p.m. on Saturday, Sept. 14, 2002, finding a wooden three-story multi-family home at the intersection of Orange and East 6th streets engulfed in flames. Kruse was one of two firefighters who were working on the structure’s roof when Kruse fell through and into the structure below.

When Ewers arrived at the scene he issued an all-call to bring in other shifts and relieve Green Shift in containing the fire. 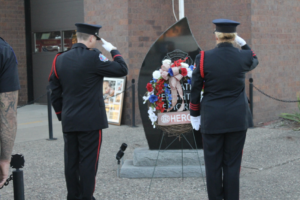 “The tragedy suffered by Green Shift was felt by all those who came to the scene,” Ewers said. “But it was best to relieve that shift and allow them to grieve. We still had a job to do but it was a very emotional night.”

Kruse’s dedication to job safety and protecting Muscatine residents is a lesson that can be taught to the firefighters of today and those of the future.

His sacrifice and loss of life while on active duty, the emotional toll it took on his family, co-workers, and Muscatine residents, and the hope that Muscatine will never again experience a tragedy such as are all part of the message presented verbally or in the silent thoughts of those attending during each memorial service.

Assistant Fire Chief Mike Hartman also knew Kruse and carried his picture with him when he completed the National Fallen Firefighters Foundation Memorial Stair Climb. The significance that two tragedies come so close together for Muscatine Firefighters is not lost on Hartman.

“It is sad but also offers you an opportunity to reflect on the job, and the sacrifices they made,” Hartman said. “I look at it as a chance to kind of rededicate yourself. Mike passed in 2002 and we don’t have a lot of people on staff who remember him.”

Ewers first met Kruse in the 1990’s as a newly appointed Fire Lieutenant assigned to Station 2. Kruse was a member of Ewers’ crew along with then firefighter June Anne Gaeta.

Ewers admits that as a very young, very green fire lieutenant he was book smart but lacked the fire ground command and exposure to structure fires.

“Mike was a true teacher and mentor to me,” Ewers said. “His experience in fighting real fires, his expertise with the equipment, and his knowledge of the city helped this young lieutenant grow.”

Kruse joined the department in 1975 and was one of the first members to obtain his fire science degree at MCC.

“He was a true firefighter dedicated to protecting property and saving lives,” Ewers said. “He was very detail oriented, liked everything clean and in its place, and took his job very seriously.”

One thing about Hartman’s relationship with Kruse is that Hartman knows that Kruse would expect him to maintain his training and safety, two things that were very important to Kruse.

“That’s one of things I reflect on at this time of year,” Hartman said. “What can I do to train a little bit more, to be a little bit safer, or to help our staff train harder and be safer.”

Hartman said you can either focus on the negatives at this time of year or you can look for ways to become better.

“Everybody is going to be sad at the loss of life,” Hartman said. “You can be sad and focus on the negative part. Or you can be sad and ask what Mike would want. Those of us, especially those who worked with Mike, would ask that question.” 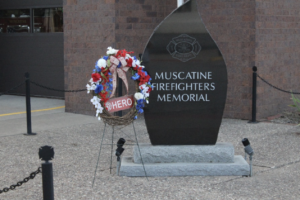 Everybody dealt with Kruse’s death in a different way. Many on staff just did not talk about the event or what Kruse meant to the department. A gap started to develop as staff left or retired and were replaced his young new hires. Hartman noted that after a while, one of the newer firefighters asked what you can tell me about the event and about Mike.

Hartman and others realized that they had not done a good job of that, and sat down to put together a presentation to give to each shift. The two-hour presentation on the event, what went wrong, what could be done better, and what Mike was all about is now given at each new hire academy.

“You cannot undo what happened but you can use what happened and get as much positive out of it as you can,” Hartman said. “I think sharing this information with the department and the new hires helps to not only keep Mike’s memory alive but it is the right thing to do and brings them into culture.”

Ewers spoke of the difference between commemoration and celebration during his 2012 speech. Commemorating an event, he said, is done to honor the memory of that event. Celebration is a time of rejoicing, a time to feel good about something that has happened.

“Commemorations often remind us of what we have lost,” Ewers said. “Commemorations are important, not because of the words spoken, but because of honor, courage, and sacrifice that were displayed during the time of the event itself.

“We all know in our hearts that firefighting is a dangerous profession,” Ewers said. “Mike knew this when he was hired in 1975. Not every firefighter who responds to the sound of an alarm is guaranteed a safe return to quarters. Some will be mentally scarred for life with what we see and encounter at emergency scenes, some will be seriously injured, and some will pay the ultimate price.

“So it was with Mike Kruse on September 14, 2002 while battling a house fire at 6th and Orange just a few blocks from here,” Ewers said. “We have gathered here to commemorate that tragic event that took one of our own and left behind a painful gap in our ranks. We will continue to do this as long as the Muscatine Fire Department is in existence.”

Muscatine’s Firefighters Memorial is located at the intersection of Cedar and 5th Streets. 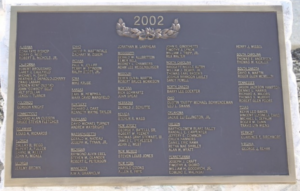 NATIONAL FALLEN FIREFIGHTERS MEMORIAL – Kruse is among the fallen firefighters to be honored with inclusion on the National Fallen Firefighters Memorial.

In his memorial, his children wrote:

“Mike was a ‘True American Hero.’ He never wanted to be recognized for all the wonderful things he did. Mike always stood up for what he believed in. He was always honest‚ even though the other person did not want to hear what he had to say. Mike always followed the rules‚ unless someone gave him a direct order to do otherwise.

Mike always put others before himself. He always talked about his family which he was so proud of. Mike stood by them through thick and thin. He gave his children unconditional love. He taught them to respect other people for who they are. Mike explained to them to love life because life is short. He became their best friend. He loved them for who they are. He was so excited about his little grandson‚ who bore his name. He took time out of his busy life to spend lots of loving moments with him.

Mike always went the extra mile at home and at work. He kept track of every run he had ever been on. He stopped by some of the houses while he was out for his morning jog and checked on patients to make sure they were doing all right. He never passed up the opportunity to play in the yearly basketball game with the Special Olympics. Mike always enjoyed carrying the boot and receiving donations for MDA.

Mike was a veteran at the fire department for twenty-seven years. He was still able to keep up with some of the younger guys. He was able to give the younger firemen the knowledge he had learned over the years. He was very respected for that.

Mike was taken from us at a moment in time when his family and friends were so proud of who he was. He will always remain alive in our hearts as a ‘True American Hero.’”