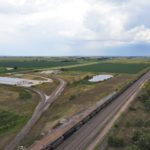 Clay Govier of Broken Bow says demand for feedstocks that support renewable diesel is driving demand for a plant. “We’re going to add value instead of exporting whole soybeans to China or wherever they’re going.  I think it’s going to make that soybean a lot more valuable in the state of Nebraska and nationwide.”

The North Platte Chamber and Development Corporation announced last week it’s searching for a partner to build a 3,000 metric ton soybean crush plant that would process over 36 million bushels annually.