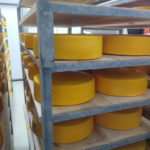 American-type cheese production totaled 468 million pounds.  That’s up slightly from a year ago and 1.5% higher than June.