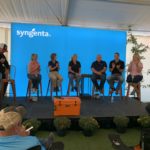 Ranking Member of the House Agriculture Committee says the Inflation Reduction Act could complicate how the conservation title in the next Farm Bill is written.

Speaking with reporters at the Farm Progress Show Wednesday, Glenn GT Thompson said the money that’s earmarked for conservation practices could be a point of contention between House members.

“Could make it more difficult because there will be some folks from suburban and urban America that will say ‘hey, we just spent $20 billion on conservation just recently, why would need a conservation title?”

The Pennsylvania Republican tells Brownfield it could set a precedent for future legislation.