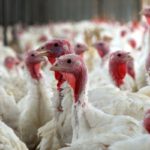 Highly Pathogenic Avian Influenza has been reported in a commercial turkey flock in central Minnesota.

The Minnesota Board of Animal Health says the Meeker County flock is the first to be confirmed with the disease in the state since May.

Senior Veterinarian Dr. Shauna Voss says the timing of the detection was sooner than anticipated and the state has been preparing for a resurgence.

The affected farm reported an increase of bird mortality last weekend and has since been depopulated.