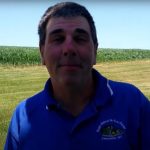 A southern Wisconsin farmer is pleased with how his crops are turning out this year.

Rebout and his family grow corn, soybeans, and hay near Janesville, just north of the Illinois line.  Rebout tells Brownfield he had a dry spell in late June and early July, but he’s expecting good yields, especially for corn.