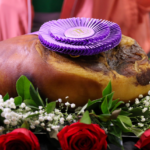 The Grand Champion Ham at the annual Country Ham Breakfast and Auction at the Kentucky State Fair brought a record $5 million.  That’s quite a bit more than the $124 that the ham purchased at the first auction in 1964 brought.

The winning bid went to Kentucky business owners and philanthropists Joe and Kelly Craft and Luther Deaton, chairman, president and CEO of Lexington, KY-based Central Bank.  Each year, the winning bidder donates the money to one or more charities.